On April 3, 2018, Mr. Santoria Black Manager of Grambling State University Radio Lab and staff planned a Day Trip to Dallas for over 35 students from the Mass Communication Department.  Mr. Black shared the the Radio Lab is a new online campus radio station in addition to the Grambling State University Mass Communication Department.  In a short period of time, the students have worked hard to resurrect the department.  Starting with only 6 students in little over a year, they quickly expanded to 42 students including 13 students that are producing radio shows that are members of the Radio Lab.

While in Dallas, Mr. Black, students and staff had a chance visit one of the top radio stations in the Dallas/Fort Worth, K104 Hip-Hop and R&B.  A few students were given the opportunity to do live radio remotes from the Dallas Mavericks game, which was heard on stations around Dallas/Fort Worth and North Louisiana. Also, the students attended the game where they had an opportunity to shadow the administration staff, and a few students had a chance to cover the game and wrote articles for a local newspaper in Dallas. 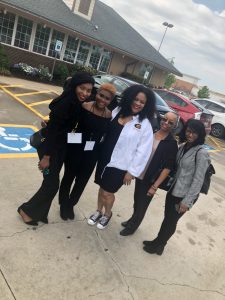